(Ramphastidae) Aracari bird's name is pronounced ARA-SAH-REE, with a soft “c” and is a member of the Toucan family. There are 14 known species of Aracari. Toucans, and Aracaris are known for their bright colors and large bills. The Aracari are medium-sized birds and their beaks can be as long as 6” and take up a quarter of their bodies. Males and females are hard to differentiate because they look the same. The bird in its natural habitat can be found hopping energetically from tree to tree, crying out. 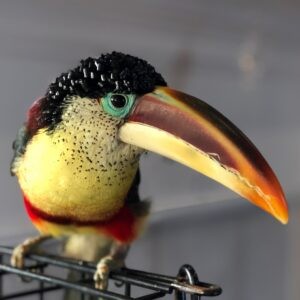 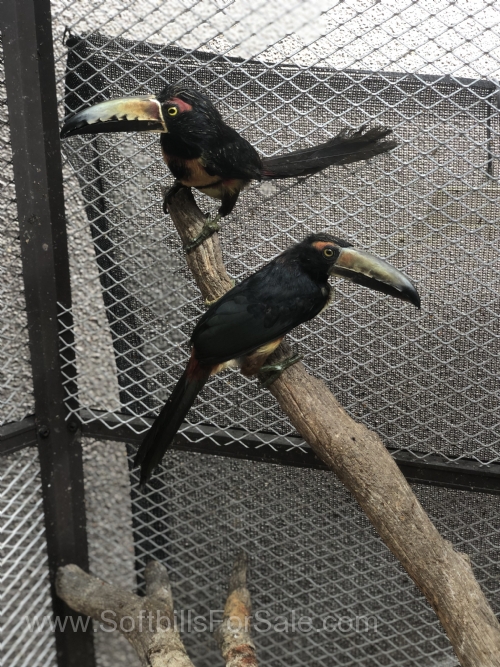 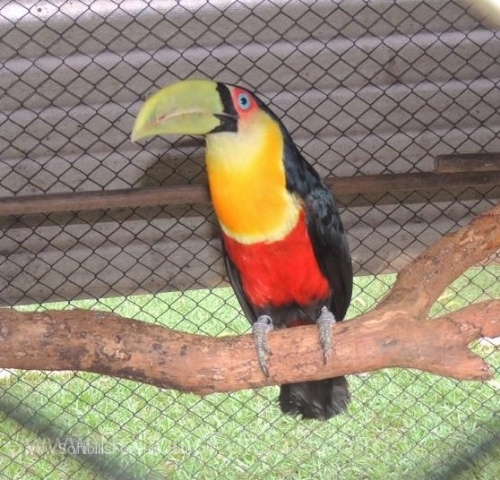 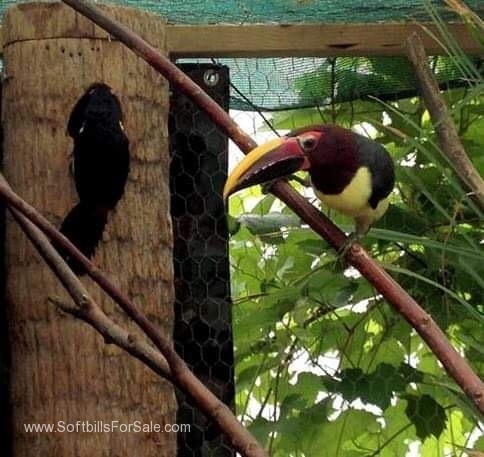 Types of Aracaris for Sale

Aracari birds are native to tropical South America (mainly Costa Rica) but can be found in other woodlands. Aracari are not migratory and can live their entire lives in the same tree they were hatched in. They are social birds that roost together, sometimes up to 6 adult Toucans in one tree with their long tails folded over their backs. Their nests are made in cavities of trees and they prefer them to be made of palm tree logs in captivity so they are able to dig their nest cavity deep. Their flocks don't usually go beyond six and their young. The 6 adults are often the mating parents and 4 of their previous offspring. Unlike most tropical birds, the previous offspring help the parents care for and feed the young until they fledge at day 40-42. 2-4 white, andelliptical shaped eggs are laid in each clutch and the mating season is between February and June.

Their bill size does deter predators and prey a little bit, but if put to the test, would do them no good. Their bill, however, is great for picking fruit from branches they are not able to land on. Their diet, like other tropical birds, consists mainly of fruit, but on occasion, they will eat insects, lizards, small animals, or even birds of another species. Their slender bodies and coloring usually make for great camouflage in trees, but researchers believe this is a coincidence and not an evolutionary survival trait because they can be found calling their very audible “cry” quite easily.

There are many places you can go to view the beautiful Toucans including the E.A.R.T.H University, the La Selva Biological Station, and many national parks. Some of the most popular species include the Green Aracari, the Collared Aracari, Curl-Crested Aracari, and the Fiery-Billed Aracari.

How to breed Aracaris?

Birds can be very difficult to breed because of their lifestyles and aggressive behaviors, depending on the species. If you are considering breeding Aracari it's important to note which are easiest to breed and keep your mating Aracari away from other birds for the most likely success. Pairs must also be compatible. Otherwise, the bird is friendly and can be housed with other species, so long as they are not too small and become prey. In nature, the bird will get its hydration from the fruit it eats only, but in captivity, the bird will need fresh water made available because its diet is heavy with pellets (with 50% fresh fruit). They are given insects during breeding season for protein. One thing keepers need to be aware of is a diet that causes them to store iron which can become a serious problem for the Toucans. Their systems cannot digest seeds and they shouldn't be given them. They also require and enjoy baths.