The species of Cotingas are birds that dwell in forests of Central America and the Tropics of South America. The Cotinga make their own family called Cotingidae. They range in size from 8-50 centimeters. The smallest of the species is the Kinglet Calyptura and the largest, the Amazonian Umbrellabird. Although their appearance varies from species to species, the males are usually bright colored like many tropical birds. Their plumes, umbrella-like crests, or throat waffles are decorative. Most species' females are duller colored. All the species have broad bills that are slightly hooked and grab fruit easily from trees, rounded wings, and short but strong legs. Those who know the bird, often know it also for it's distinctive and far-reaching calls. 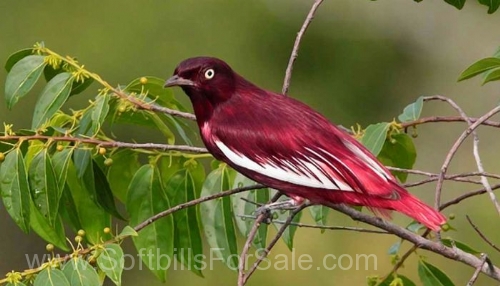 Types of Cotingas for Sale

Cotinga are not monogamous. The males mate with several females after winning them over in what is called a “lek”, an elaborate dance and mating display put on by several males at once. Females, after mating, are left to care for their eggs and raise their young alone. Many Cotinga lay only one egg per mating season and incubate and live in flimsy nests. Some species' nests vary, some made of solid materials and in a more secure cup shape, others such as the cocks-of-the-rock attach nests constructed with mud to cliffs.

There are 90 species in the Cotingidae family. Some species of Cotinga include bellbirds known for their bell-sounding calls, cocks-of-the-rock known for their territorial behaviors. Most of the species perform their mating rituals in one tree or adjacent trees, but the cocks-of-the-rock Cotinga prefer to make the scene on the ground. The most common species in captivity is the Spangled Cotinga. It's coloring is mainly black, but it's chest and breast are turquoise blue. Fisherman use these feathers to make flies. Most Cotinga prefer a diet of mostly fruit or insects. The spangled Cotinga bird eats mainly fruit, does not sing but produces whistling sounds with its wings during flight, and mates in Spring months.

Another famous Cotinga is the Cotinga Maculata, a beautiful Brazilian resident that is bright cobalt blue with splashes of black and a purple belly. Its females are duller, like many Cotingas, a brown with white ringed eyes. Most Cotinga are considered of “least concern” of endangerment, but the Cotinga Maculata, A.K.A the Banded Cotinga is nearing extinction with an estimated 250 or less mature birds of the species. Banded Cotinga have been watched closely in recent years, having been moved from the endangered list to “critically endangered” due to quickly declining populations. The suspected cause is loss of habitat, but Cotinga of all kinds can fall prey to predators such as hawks, sparrows, buzzards, and other large birds. Their young and eggs can also fall prey to much smaller predators such as lizards, squirrels, and raccoon.