Starling birds look like blackbirds from a distance, but up close are made of iridescent purple and green. They are native to Europe and have 11 subspecies that live there and in Asia. They can now be found in the United States as well, but are considered an invasive species and are not protected by The Migratory Bird Treaty Act which allows humans to humanely destroy the birds, their eggs, and nests. Their populations thrive due to their ability to adjust to nearly any environment, city or farm, and eat a variety of things. Starlings cause an estimated 800 million dollars in crop damage per year. They are also pests in the urban environment where they can roost with thousands of other birds and make a lot of racket, get into trashes and spread their contents, as well as “dropping” wherever they please. 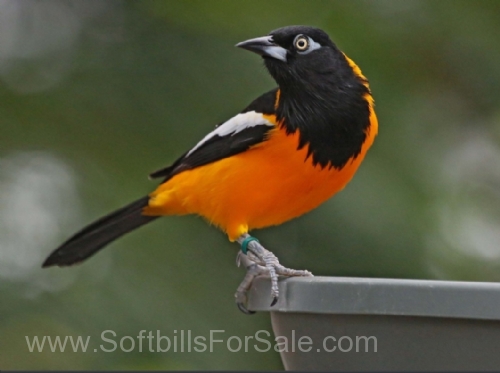 Male trupial and a pair of greater blue ear starlings , local pick-up only

Types of Starlings for Sale

Starlings can create a nest in 2-3 days and only nest within cavities. They will nest in human-provided things if they feel they are adequate. It's here where prevention can begin because Starlings will nest in the same place year after year, you can be sure to get rid of anything that poses a potential home for them. Don't be surprised to find them nested inside the bathroom, stove, dryer vents or any vent with a door on it. They are capable of flying mid-air and opening the vent to enter it. Act immediately if you find an active nest in or around your home or property. If eggs or young hatchlings are present, you can leave the nest until the birds are able to move on before getting rid of the nest and sealing up the hole they came in through. Removing the nest is also an option if there are hatchlings inside (but won't work if there are only eggs), but the nest will need to be placed within a jug and put somewhere for the parents to continue care for them until they all move on. The noisy little hatchlings will alert the parents as to where they are. If things aren't going as planned or you have questions or concerns, your local wildlife rehabilitation specialist can help you.

There is even more to hate about the Starling, unfortunately. The fact that their droppings provide the necessary nutrients for a harmful fungus to grow is unsettling to approximately 80% of human populations in contact with it in the Eastern and Central United States. Few things are good signs about the birds;

With fewer nesting sites, they may even fight each other to death with their aggressive nesting behaviors. Scientists continue to search for the perfect solution. In Europe, however, the Starling population is declining! It's thought to have been caused by the change in land-use practices. This may have contributed to the current findings of solutions for the overpopulation of the U.S.

Keeping some of the species as pets can be a different experience entirely for the right keeper. The Starling is as capable of learning language like a parrot like its relative, the Indian Hill Myna. They bond extremely well with people, however, require that attention daily and once captured, cannot be released back into the wild. It's important to realize they can live to be up to 22 years of age. They also require a lot of space and prefer to be where the people are! They enjoy toys and watching TV, listening to telephone conversations and shredding leaves for fun. In captivity, they are not picky eaters per se but will require small animals and insects to eat. They will also eat fruit and a variety of other things to supplement their diet. If considering this pet, check in with your county or state to be sure you won't require a permit.