Ratites are pronounced "Rat-TIGHTS" and are the word used to classify a bird family that does not fly because it has small wings and a flat breastbone with no attached keel. Without a keel, their wing muscles are not anchored to their body in such a way to allow them to fly. This is why in part, they are named Ratite which is a derivative of the Latin word Ratis, meaning raft. Ratites are among the largest birds in the world. You may know this bird family already by key players, the Ostrich and the Emu. The Ostrich is the largest bird in the present world. An Ostrich can grow as tall as 8 feet tall and weigh as much as 400 pounds. The second-largest is the Cassowary and the third, the Emu. Many birds of the Ratite family have become extinct, mainly the Aepyornis, believed to be the largest bird ever known. 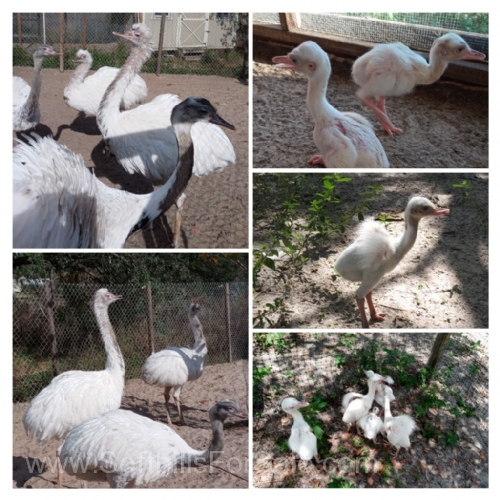 Baby rheas (chicks) pre-sale- whites Place your order for white baby rheas. The girls are laying and I have fertile eggs in the incubator. - Whites---$300 ea. All babies are unsexed. I will not know if they are boys or girls. With purchase I w...

Types of Ratites for Sale

Research suggests that the Ratite family evolved after the extinction of dinosaurs and that's the explanation for their very existence and physical form. They did not require flight to flee from predators and had plenty of food supply to grow to their current statures. Had they existed the way they do today, they would have been a good source of food for dinosaurs. Some scientists believe they evolved from Tinamous, a flying bird from South, Central and North America, but others disagree and a unanimous conclusion has yet to be made.

In nature, this bird's way of life is much different than others, affected by being flightless. The Ratite family has special features to protect themselves because they cannot fly away or attack a predator in the same ways as other birds. Their eggs are thicker and their young more developed as to protect themselves from an earlier age. Their elders aggressively protect them after birth as well. Although mating rituals and life are different from species to species within the family, some things are common. For most Ratites, the female lays the eggs, but the responsibility of incubating them are spread among a communal nest. The females leave often and even lay eggs for other nests to incubate and protect. The Kiwi variety is the only Ratite bird species that is monogamous, among other uncharacteristic traits. Kiwi is the smallest in the Ratite family measuring no bigger than a chicken.

Across the species diet various after they grow out of chickhood. As chicks, they are omnivores and/or eat mainly insects, but as they gain in size their digestive tracts vary, a physical indication of different diets.

During the 18th century, Ostrich feathers were popular additions to hats which led to a large decline in the Ostrich population and became a farming movement. Emus and Ostriches have both been farmed for their feathers, leather, meat, eggs and oil. Farming continues to this day and the USDA began regulating more closely beginning in 1995 but made meat inspection mandatory in 2001 in an attempt to improve the marketability of this type of poultry.